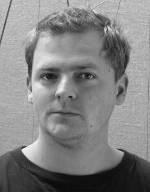 Bohumil Eliáš Jr. (1980) also focused his artistic interest on glass. In contrast to his father, however, following the completion of his studies at the Secondary Applied Arts School of Glassmaking in Kamenický Šenov he chose to study at Professor Jan Hendrych’s studio of figural sculpture at the Prague Academy of Fine Arts, graduating in 2007. He now develops his artistic expression through painting in the form of molten-cast glass sculptures. He has also produced several works in bronze and other sculptural materials. In this diversity of individual areas, he follows on from the dynamic creative range of his father. However he himself chooses a different path that is free of expressive colour and the complexity of mutually connected planes, one that is above all devoid of the narrative features of stories. This does not mean that it is any less sensitive but simply that it has a different orientation. The dramatic actions of the ‘theatre of the world’ are substituted by plays on the composition of shapes, details, and fragments of objects.

Produced in painted layered glass, Bohumil Eliáš Jr.’s work is most often focused on the architecturally conceived construction of linear structures and rigid forms. In his enclosed forms he creates subtle shimmering compositions. His experiences in the field of free figural expression in plaster and bronze as well as his sculptural perception of forms are applied in his melted-glass sculptures whose appearance has its roots in the sculptural rediscovery of realities. A frequent source of inspiration is provided by fragments of ancient architectural wholes set in an artistic context. In this sense we can clearly see Eliáš’s fascination for the theme of the bridge and the window in a visual enchantment with the harmony of forms itself, though also with more profound symbolic contexts. The monochrome mass of the glass is softly modelled by the light that penetrates it, giving the sculptures a sense of silent mystery.

Eliáš is, however, often fascinated by the independent sculptural quality of the tiniest detail without complicated symbolic connections. Damaged machine parts, discarded remnants of materials and quotations of the shapes of construction elements, sometimes also in contrasting material execution, are incorporated into the expression of a monumental whole. Their deliberately fragmentary character makes us think about their original completeness.

Eliáš’s painting has much in common with the original stylistic purism and strictness of his expression in glass. His paintings have their thematic starting point in elements similar to those that appear in his glass. The pictorial area is often articulated by geometrical configurations stemming from the fragments of various realities, ranging from iron girders to the bizarre structures of cut sheet metal. These motifs are often rhythmically repeated until they form simplified abstract compositions that enter imaginary free space lacking the specific basis of events rooted in meaning. His painting, like his glass, is characterised by a reduced intensity of colour.

Bohumil Eliáš Jr. ranks among the most promising and diligent figures of the youngest generation of Czech glass artists. His perception of objects has enabled him to create his own authentic forms of expression and continue along the artistic path of his celebrated father.